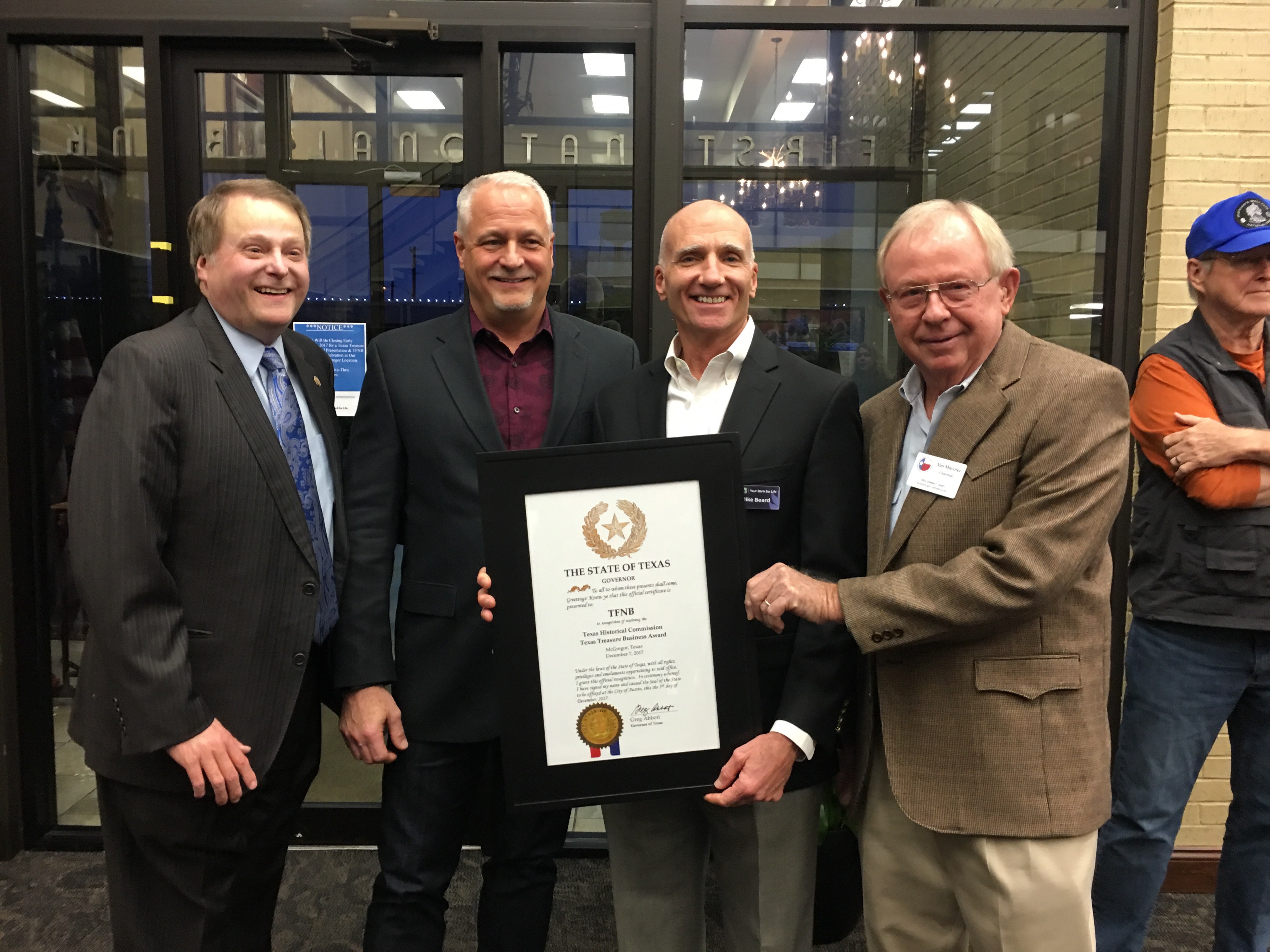 McGregor, TX — TFNB’s longevity in the community and contributions to the state economy and local community have earned it the Texas Treasure Business Award, TFNB bank officials announced today.

The Texas Treasure Business Award honors businesses that have been operating for more than 50 years and that create jobs and stimulate economic growth. Representatives from the McLennan County Historical Commission presented the award to TFNB on December 7th.

Texas Senator Brian Birdwell attended the presentation and spoke to attendees.  “There is not a long list of businesses that have been around for more than 125 years,” said Birdwell.  “When you have 254 counties and 1,000+ cities in a state as big as Texas, this award is a distinct honor.  I grew up in Granbury, and there is nothing better than small town banks, and when you are doing it for 125 years, you are doing something right.”

The First National Bank of McGregor, now operating as TFNB, was founded as an independently owned, community bank in 1889 in McGregor, Texas by a group of local businessmen. Since then, the bank has been an active employer in Central Texas with more than 60 employees today. The bank’s Articles of Association, which was signed on June 28, 1889, show Chas. F. Smith as cashier, who was paid $100 a month and a bookkeeper who was paid $50 a month.

In 1957, the bank moved from its original location at 217 S. Main in McGregor, Texas to a more modern building across the street and two blocks south to 401 S. Main, where its downtown McGregor bank is located today.

It was purchased in the 1960’s by a group of area businessmen. Two stakeholders were Pat Beard and David Kultgen, lifelong business and law partners. Today, TFNB is owned by a new generation of bankers known as McGregor Bancshares, Inc. Beard’s son Mike oversees the bank from the downtown McGregor location, and he serves as chairman of the board. Kultgen’s son serves as a director on the bank’s board.

In 2000 Mike Beard hired Waco native David Littlewood as president to run the bank. Littlewood, now president and CEO, brings years of banking experience as well as connections from the bank’s early days.

“This award is especially meaningful to me since I have ties to past, present, and future of the bank,” said Littlewood. “I am a descendant of one of the bank’s presidents from the early 1900s, and my work at the bank began about a century later.”

James E. Brown, the brother of Littlewood’s maternal great-great-grandmother, was raised in Crawford.  After college he returned to Central Texas, where he, his wife Edna and children resided in McGregor for nearly 30 years. It was during this time he served as president of the bank. He was active in politics and was among the founding contributors to Southern Methodist University.

In 2006, the bank opened TFNB South Bosque on Highway 84 on the eastern edge of McGregor to serve the growing population between McGregor and Waco. TFNB’s third full-service location, TFNB Triangle Tower, opened to serve Waco customers in early November. Next summer, TFNB will open its fourth full-service location at 901 S. 8th Street in downtown Waco.

About TFNB Your Bank for Life